Working With the Game-Changer Known as CRISPR

Katelyn Brandt found herself excited and motivated when she encountered a middle school science teacher who didn’t hesitate to push her students. The power of a single teacher had remarkable effect, sparking a future in science for a young student. “Because I was not often challenged in school, the dedication of teachers like Ms. Pussey and my parents were instrumental in helping me recognize my passion and to start me on my path towards where I am today. I was one of the fortunate ones who had parents involved in my success and who encouraged me to never let the world dictate what my limits are,” she says.

CRISPR involves a group of molecules which are capable of editing DNA. Vastly different from any other genetic editing attempted, CRISPR is a scientific superstar and scientists are clamoring to create or join labs like the one at State run by Barrangou. CRISPR, a naturally occurring system, is being coopted as a genome editing tool, explains Brandt. Therein lies an enormous difference that has become the passionate focus of scientists here and around the world.

Katelyn Brandt is a petite runner, volunteer, and scientific researcher. She likes to work out and she loves reading. When her schedule allows it, she would love to finish reading The Lord of the Rings. The fantasy novel by J.R.R. Tolkien, published in the 1950s, concerns a hero’s journey.

Brandt is undertaking one of her own.

The enthusiastic North Carolinian is a Pennsylvania-born transplant who joined Barrangou’s team after completing undergraduate studies in biochemistry and molecular biology at Pennsylvania State University. At Penn State she studied the histidine utilization pathway in pseudomonas.

Brandt told everyone she would go straight into industry. Graduate study was something she eventually planned on, but not immediately upon graduation. She had settled on another plan: she would become a STEM scientist working in the Research Triangle Park.

Brandt credits a Penn State professor for both igniting and redirecting that interest.

“Boston, San Francisco and the Research Triangle Park are leading in innovation,” she says. “When I was doing research at Penn State, Dr. Allen Phillips told me I should go to RTP if I wanted to do work in genetics.”

Brandt was eager to jump into her career—in fact, she couldn’t wait. “I knew I would have to go to grad school at some point, but I intended to go into industry all the way through high school and college. At the very end, I decided, no, I would go to graduate school.”

Thanks to a family friend, Brandt was already aware of NC State and its reputation. NC State was in the sweet spot for scientific innovation: RTP.

We talk about the next big topic, and what is next. CRISPR is so revolutionary, but what will be the next thing?

“One of the biggest draws at NC State was the link between the campus and industry. Another huge draw was the relationship with RTP, and I picked the campus around that. The perfect events aligned.”

Brandt is excited by the fact that this close alliance of academia and industry means that her doctoral advisor, Barrangou, is deeply involved in both.

This synergy inspires members of her lab, especially given the reputation and draw of their mentor. Barrangou’s name is often cited for his work with CRISPR.

She mentions other scientists who were at the forefront of CRISPR, who have become involved with NC State.

“The lab has collaborated with Jennifer Doudna,” Brandt says. “And, I met Jill Banfield when she was appearing at Duke. Two of our students are working on CRISPR patents.” She has already published a paper, and has another in review. Brandt, 25, intends to complete her doctoral work in 2019.

Brandt says the energy in the lab is collegial, supportive, and inspires her. “It is where you see big ideas,” she adds.

“We talk about the next big topic, and what is next. CRISPR is so revolutionary, but what will be the next thing?” she asks. “Rodolphe is identifying new directions and making this an innovative lab. I’m pretty sure I want to go into industry. Beyond that, Rodolphe is great about encouraging my development.”

This summer she attended the Graduate School’s Industry Immersion Program for doctoral and postdoctoral researchers, the first offering of its type. The program further spurred her thinking.

“I came back from the Industry Immersion Program thinking that was one of the best things I got out of the program—finding a model for my career. Now Rodolphe and I are looking at ways to explore it.” 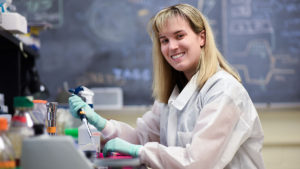 In her deepest self, Brandt long understood that a life of science was to be her path. She has known what she wanted to do for the last 13 years, she insists. She just didn’t necessarily know where until a mentor pointed her towards Raleigh and the Research Triangle Park. The family friend helped guide where she would need to be to bring her dreams to fruition.

When Brandt was just a 12-year-old middle schooler, she developed serious adult ambitions and a big crush. She fell hard for science. Prior to that, Brandt was a good student and liked mathematics enough that she might otherwise  have pursued it.

She just was never quite as passionate about mathematics.

“Before that, I hated science,” she stresses. “It was just basic. Boring. You didn’t even have to think. Then my seventh grade teacher, Ms. Jennifer Pussey, made it really fun and challenging.” The teacher so inspired her that Brandt recently searched her mentor out on Facebook.

“I wanted to tell her that I am where I am because of you.”

Inside science, Brandt quickly found a track that absorbed her. “Early in high school I knew I wanted to study genetics. I knew I had been gifted and blessed. I had intelligence and had to stop and apply myself, to stop and think…and genetics was most interesting to me.”

Part of Brandt’s interest in genetics was spurred by the personal. Given her mother’s work with special education students, she had particular cause to think about genetics. She also had some cousins who had learning disabilities. “I remember being excited about the genetics class. We were a small rural town; I just made sure to take as many AP classes as I could. My parents knew I was interested in science.” She majored in biochemistry and molecular biology at Penn State.

And in another couple years, Brandt, a student in the functional genomics and genetics program, will complete her Ph.D. “Fingers crossed.”

Essentially, the entire Brandt family migrated to the South. “My younger sister, Sarah, is here. She is majoring in Spanish, with minors in education and business administration. Our parents had been talking about retiring to NC, and my sister decided to give them a nudge. But we found NC State independently.”

Her parents have settled down in the coastal community of Sunset Beach on the North Carolina coast.

Within the family, only Brandt’s cousin studied biochemistry. “I love it; we are excited when we talk about it,” Brandt says.

“My sister chose Spanish because that’s her passion, but she could easily have gone into STEM, so my parents use her as an interpreter whenever I discuss what I do in genetics, when I am too technical.”

Brandt’s area is in the classification of lactic acid bacteria. “I finish one thing and add a new one; I’m at the crossroads of looking at the CRISPR systems and probiotic potentiality. That, in a nutshell, is what I do.”

She explains, “CRISPR in general is adaptive immunity for bacteria. For years we didn’t think that bacteria had memory. When it combats the virus it looks for a specific DNA sequence and cuts it. That’s why people take this tool and use it for genome editing.” (Remember, Jennifer Doudna is famous for that, she reminds.)

“Now we can take it and put it into any cell, and tell it to cut anywhere in the genome. That is what CRISPR does. We can go and knock out genes. If you have a bad gene, we can go get rid of it. We can change or edit out a gene.”

It is worth noting that so much of the early work with CRISPR was done by women. “Up until last December we were a lab of all women,” Brandt says. “And, Rodolphe is very big on supporting women and giving them opportunities.”

AWIS, the Association for Women in Science, has encouraged mentorship and outreach with area high school students, she mentions. Perhaps Brandt recalls her impressionable younger self, eager to become a scientist as a teen.

Meanwhile, Brandt has also involved herself with a charitable cause, an annual Dance Marathon which raises funds for the Children’s Miracle Network and Duke Hospital. The Dance Marathon is something she became interested at in Pennsylvania. “We ask all dancers to try and raise $100. It will be in the Talley ballroom February 24 of next year. It isn’t that tough. Roughly every hour we do a line dance that we make up each year. A slogan one year was ’bad dancing saves lives’,” she laughs.

As for the future of genetic applications and saving lives, is gene therapy feasible in her lifetime?

Brandt answers slowly, offering one appealing possibility. “I think a lot of people want personalized medicine. Whether that will be feasible anytime soon, I don’t know.”

Within The Lord of the Rings, Tolkien uses a repeating theme—that of nature and industry in conflict. In the case of CRISPR, nature and science could potentially also be in conflict.

As for Brandt, she prefers to leave that to the ethicists.

Rodolphe Barrangou,  a Todd R. Klaenhammer Distinguished Scholar in Probiotics Research at NC State, works on beneficial microbes, focusing on the occurrence and diversity of lactic acid bacteria in fermented foods and as probiotics. Using functional genomics, he has focused on uncovering the genetic basis for health-promoting traits, including the ability to uptake and catabolize non-digestible carbohydrates.

Barrangou spent nine years at DaniscoDuPont, characterizing probiotics and starter cultures, and established the functional role of CRISPR-Cas, as adaptive immune systems in bacteria. He works toward establishing the molecular basis for their mechanism of action, as well as developing and applying CRISPR-based technologies for genotyping, building immunity and genome editing.

Katelyn Brandt has been working in Barrangou’s lab. “Rodolphe is very big on supporting women and giving them opportunities,” she says.

Read more about CRISPR from tHINK:

What You Should Know About CRISPR, by Cindy Adams 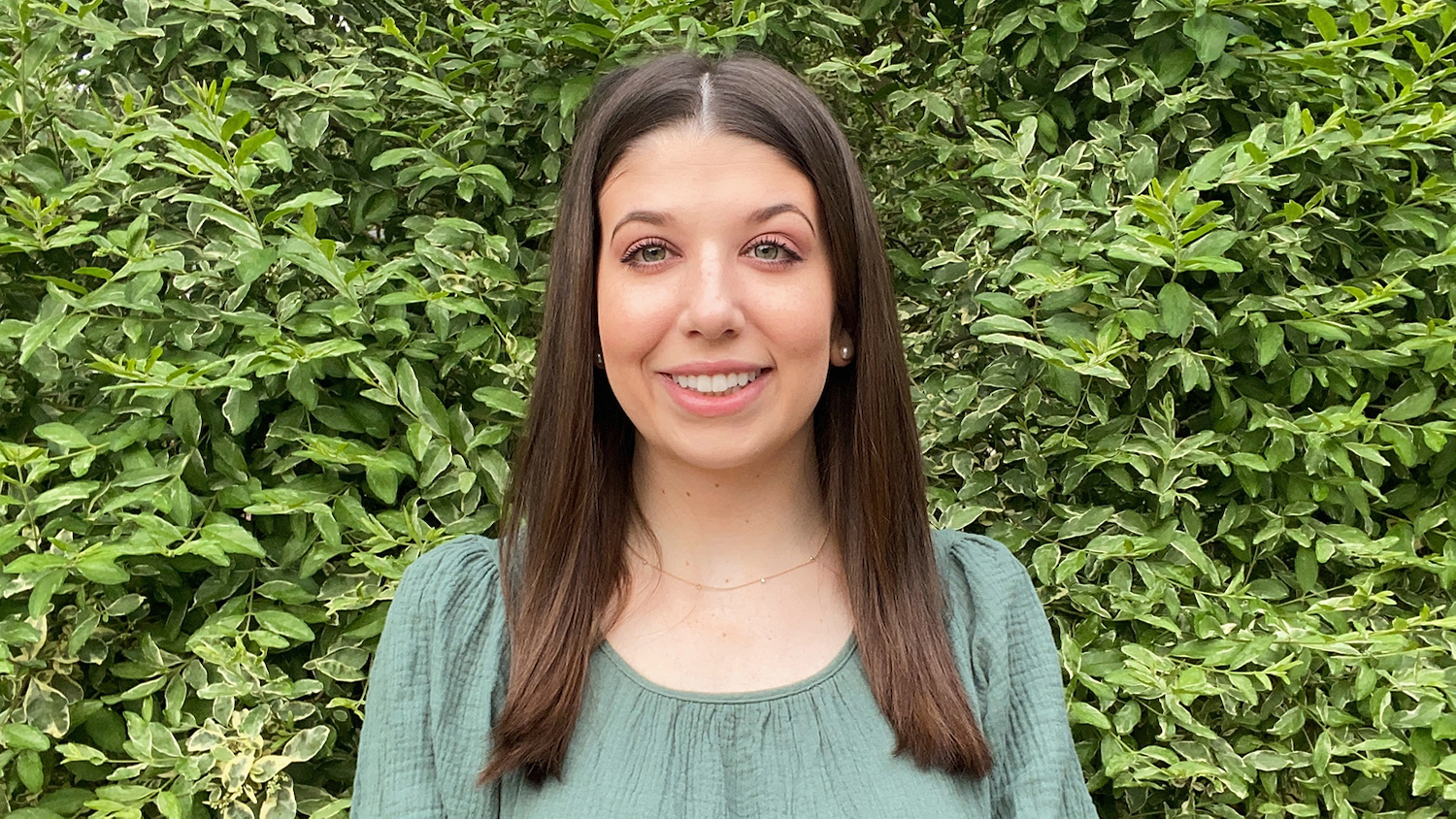 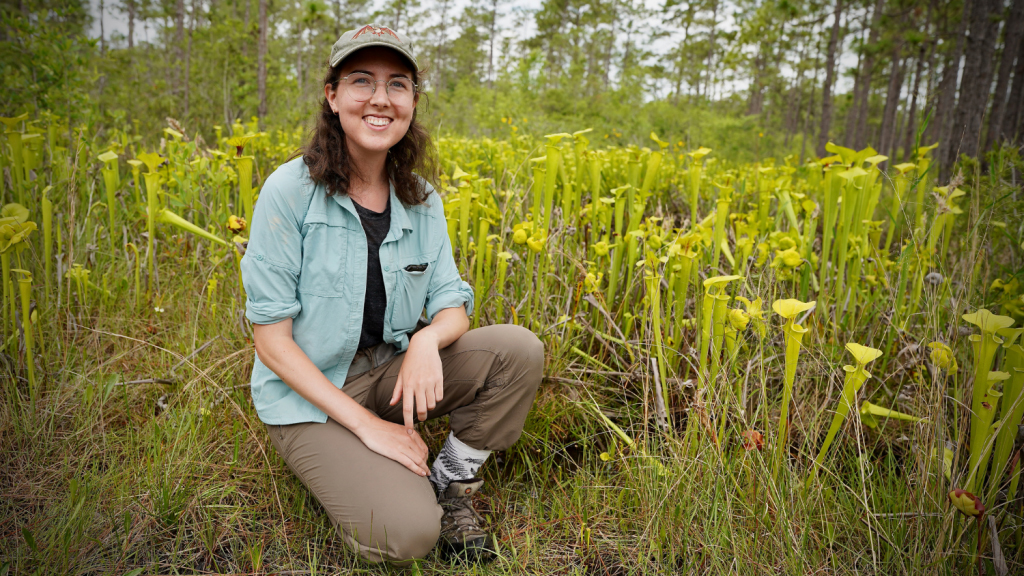 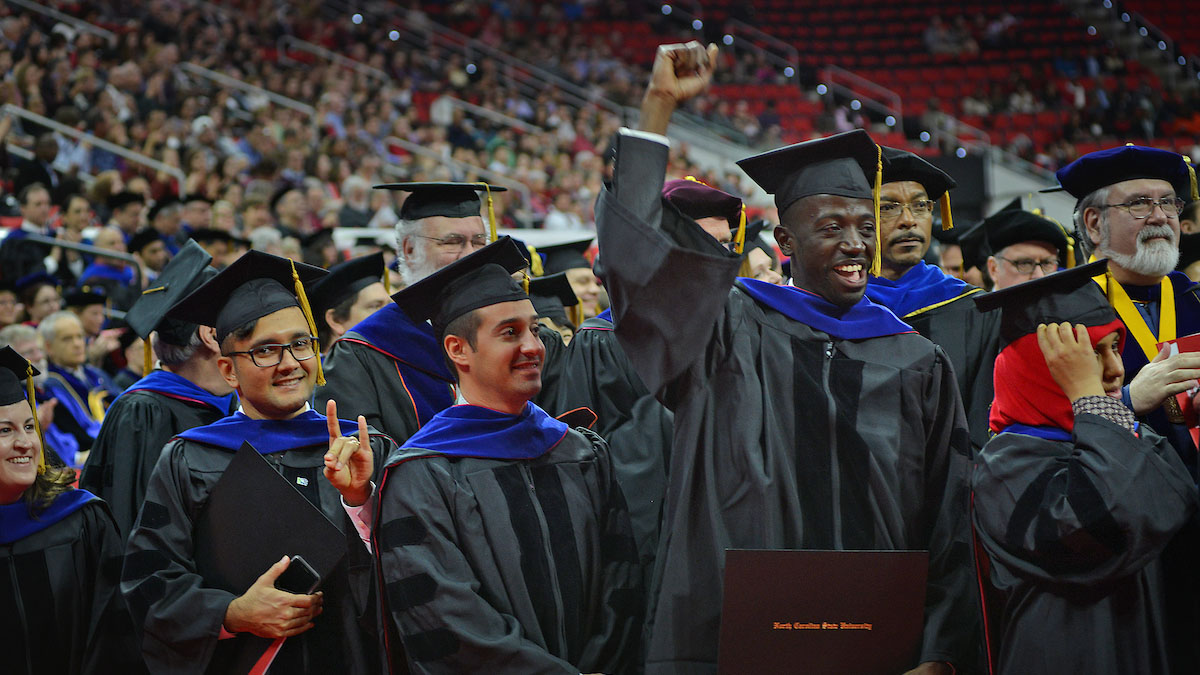